We all see the world in our own way. Our senses and perceptions are unique, our thought processes idiosyncratic. In the end our differing tastes, interests and personalities are what makes life so beguiling.

My father-in-law was the Head of Mechanical Trades Department at the Cork Institute of Technology.   He lives, eats and breathes metals, fluxes, solder and welding arcs. When he watches a film or television program his attention without fail is caught by the metal object in the corner (“Stainless would’ve been much better for that!”), or grabbed when a character refers to a metal prop (“They could never use tin for that! They would have to use galvanized for it to stand a chance!”)

And woe the poor cinematographer who dared shoot a welding scene… “That’s rubbish! It’s the wrong flame altogether! They could never weld that iron at that temperature! Are you joking me?”  We all have memories from our youth of our parents and their favourite sayings: my wife and her siblings can’t glimpse a welder or cutter at work in a film without warning “Don’t look at the flame!!!”

As for me it’s antiques. My long suffering wife has sat at my side in theatres and sitting rooms for nearly two decades and listened to me admire that chair the murderer is sitting on, or gripe about the villain smoking a cigar near the old master oil painting, or tense over the callous nephew tossing the gravelly object onto the Pembroke table (“Watch the finish!”) 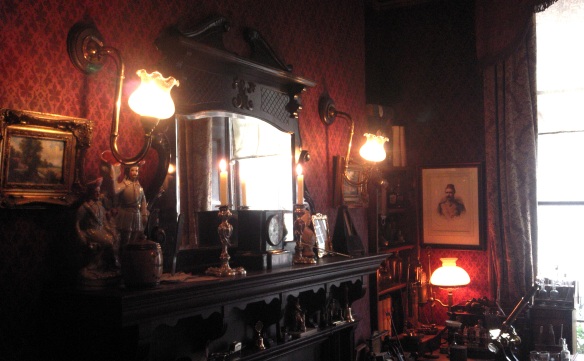 Period bliss: Authenticity on display at The Sherlock Holmes Museum on Baker Street.

When the research is done right, the set design of a film is a work of art in its own right. The set can also be quite educational, showing antiquated objects as they were used or appreciated during their original period. For example in most any Dickens or Holmes it is an eye-opener to see how a miscellany of Victorian clutter can suddenly make sense, and a visually striking design, when seen in the hesitant glow of oil lamps or gas sconces. It is inspirational to see Art Deco furniture and accessories set in their period architecture (a la Poirot). It is just as exciting to visit an Arts and Crafts suite as intended in a Craftsman’s house, or to nestle in a period Adirondack lodge.

On the other hand, when they get it wrong it is worth ringing down the curtain. Once you start to pay attention you may be shocked at the mistakes that are often made. The worst is when they can’t get the style right for the time period.  How can they possibly expect us to watch George Washington and General Knox discuss Dorchester Heights while seated on Regency chairs at an Eclectic Movement desk? I mean, what did we fight a revolution for anyway?

Films cast during the Middle Ages seem to  be especially bad … all those fantasy films with dungeons and dragons and knights in shining armour, set in these wonderfully atmospheric crofter’s cottages and stone towers. Ever notice how even peasants are typically shown in quarters crowded with furnishings? The reality was an oak table. Period.  Maybe a couple of joint stools. That’s the inventory. The whole medieval enchilada.  The wealthiest folk might, after many generations, have been able to save up for a press or dresser. But all these fully furnished rooms with richly carved cabinets, upholstered chairs, sumptuous bedsteads, heroic banquet tables and tapestries… only in King Arthur’s dreams!

Let’s jump ahead and follow Daniel Day Lewis or Mel Gibson into the Colonial Period. Now we’re talking.  Remember all those films where the redcoats couldn’t find the secret document hidden in the pewter smith’s carved mahogany library cabinets, or the frontier belle flirted in her father’s well-appointed ballroom, or in a dawn raid all this furniture would get pulled out of the pioneer’s cabin to be piled on a bonfire?  In reality these folk lived pretty as humbly as their ancestors did in the Middle Ages, although dressers, settles and a few other pieces were often on the scene by now. As for the rest I fear suspension of disbelief can only go so far, no matter how clever the plot!

Now you might think I’m taking this all a mite too seriously.  But consider:  Washington Irving borrowed and stole some folk lore here and there, moved it upstate of the Catskills and gave us the forever wonderful Legend of Sleepy Hollow. Then along comes Johnny Depp, the fog and mystery rolls into the 17th Century Hudson Valley, the suspense mounts, the Headless Horseman rises in his stirrups to dash his jack-o’lantern… and then our hero sits in a circa 1820 Windsor fan-back chair and gazes adoringly at his beloved nestled beneath her 1880s patchwork quilt. Now what can Christopher Walken possibly do to terrify us more than that?

Hollywood has got a lot to answer for, but in fairness they do occasionally get it right. When they do it is not only a sensuous pleasure, it can also be a stimulating lesson in history and the decorative arts. Come back next time and join me in a visit to Downton Abbey.